The Land of the Baptism

A land filled with historic holy sites from both the Old and New Testaments, Jordan is a place like no other on earth. Most historic of all is Bethany-beyond-the-Jordan, the site where Jesus was baptized.

In Old Testament times, the land east of the Jordan River include the Ammonite, Moabite and Edomite kingdoms. In the new Testament, the region included most of the cities of the Decapolis. The Greeks called it Perea, which meant the "territory beyond." This is where Jesus taught multitudes, performed miracles and cast our demons, as he traveled back and forth between east and west, proclaiming his message.

Take a minute to scroll through our Jordanian Holy Site itineraries and see what each location has to offer you!

We’ve created a virtual Bible Trail Map with info on each holy site as well as photos and travel resources.

GO TO THE MAP (COMING SOON)

This guide covers each religious site, its significance, and itinerary suggestions so you can make the most out of your trip to Jordan.

This is a resource which compiles all the latest news articles related to Jordan and traveling in Jordan.

'I baptize with water,’ John replied, ‘but among you stands one you do not know. He is the one who comes after me, the thongs of whose sandals I am not worthy to untie.’ This all happened at Bethany on the other side of the Jordan, where John was baptizing.

Member of the Clergy 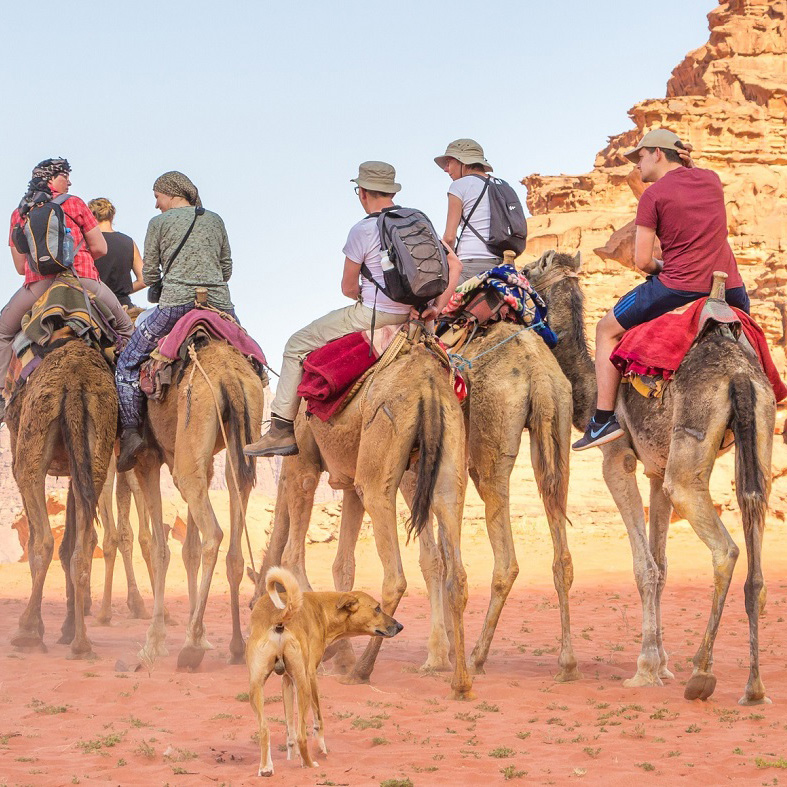 Jordan may be an open-air Sunday School, but there is plenty more for you to enjoy as you make your way along the Bible Trail. Discover more about the experience awaiting you in Jordan - the eastern part of the Holy Land.

The Land of the Baptism.

The Land of the Baptism.

Discover the biblical history, culture, and people of this storied kingdom in the Holy Land that bears the name of the baptismal waters.

Jordan Behind the Hymns.

Jordan Behind the Hymns.

You know the hymns by heart. You've sung them for years. But do you know the biblical events that inspired them?

The Wilderness Trail of John the Baptist.

The Wilderness Trail of John the Baptist.

Follow in the footsteps of John the Baptist to deepen your faith and understanding of his message.

Follow in the footsteps of prophets and pilgrims who have gone before you to discover the true meaning of refuge.

WANT MONTHLY UPDATES ON THE LATEST NEWS FROM JORDAN? SIGN UP FOR OUR NEWSLETTER

Bethany-beyond-the-Jordan, the Wilderness of John east of the River Jordan where Jesus was baptized, is like no other place on earth. According to Scripture, the heavens opened twice here – first as Elijah was taken up to heaven on a chariot of fire, and second at the baptism of Jesus, when the Holy Spirit descended like a dove upon him, and His Heavenly Father proclaimed His beloved Son. This is the same wilderness area of “The Crossing,” where Joshua and his people crossed the Jordan after their long Exodus journey, so it is no coincidence that Jesus came to this very place before crossing from east to west to begin his public ministry.

Now a UNESCO World Heritage Site, Bethany-beyond-the-Jordan welcomes pilgrims from around the world. Located just north of the Dead Sea, the lowest place on earth, visitors can walk the pilgrim trails of this protected park, just as the first pilgrims did during the early days of Christianity. Here, the remains of early churches that were built to commemorate the very place of baptism are easily accessible. In addition, new churches and guest houses of varied traditions offer places of worship and rest for individuals and groups alike. For an online tour of the many archaeological sites within the park – offered by the very guide who has led popes, priests, world leaders and other dignitaries – please click here.

As the birthplace of Christianity, Bethany-beyond-the-Jordan is of profound importance to believers. However, it is just one of the many Old and New Testament locations in Jordan easily accessible to pilgrims who make the journey.